If you’ve watched an episode of Sweet Magnolias on Netflix and found yourself getting dreamy-eyed over Maddie’s kitchen tile instead of Coach Cal’s smile, well then you’ve come to the right design-obsessed place. Because we’ve already tracked down where you can buy the outfits from the show, we’re now directing our Nancy Drew-style sleuthing to the show’s warm and welcoming set design. You may already know that most of the series is filmed in and around Covington, Georgia, but did you know many of the interiors (including Sullivan’s, The Corner Spa, and Maddie’s and Dana Sue’s houses) are sets built from scratch on a stage? Production Designer Aimee Holmberg and Set Designer Nik Morgan, both of whom actually have a background in—who would have guessed?—the horror genre, spoke to Country Living about why the Southern setting inspires she show’s aesthetic, how they scheme up spaces around each character, and where they sourced all that cute decor. (Good news: Much of it’s from budget-friendly sources including HomeGoods, Rooms to Go, Etsy, and Spoonflower!)

“Sweet Magnolias is very much a character-driven story and we approached [the design] with the intent of developing the characters’ spaces in ways that would further their personal stories in the eyes of the viewer,” says Aimee. “We discussed each character at length with our lovely show creator Sheryl Anderson, right down to their hobbies, favorite foods, books and artwork.” If you look closely, Aimee notes you can spot hints about each character in the design details. “Clues to Dana Sue’s wild child past can be found featured on her mantel and wall mounted display shelf above,” says Aimee Here’s the nitty gritty on all that pretty.

Get the toasting over with so we can talk paint colors, okay?

The location used for the exterior shots of Maddie’s home is an 1890s farmhouse—”one of the oldest in Covington,” notes Aimee. To bring the interior to life, the team embraced a “palette of soft warm neutrals and floral patterns, with punches of more vibrant teals, corals and blues to keep it fresh,” says Aimee, as well as a “stylish but effortless mix of newer furniture, antique store finds, and family heirlooms.” Set designer Nik Morgan also notes there’s a lot to be learned from those layers: “In Maddie’s case, the most important story to tell was that of her family, specifically their past and what their lives had been up until where we find them now. All the photos and trinkets, the different styles of furniture gathered over time to fit her taste and needs, the messes that comes with children and teenagers, the kitchen that most definitely has seen some huge meals and action, all these things were there to show the foundation and home she had built expanded upon—only to have it serve as a reminder that it will never be the same again.” 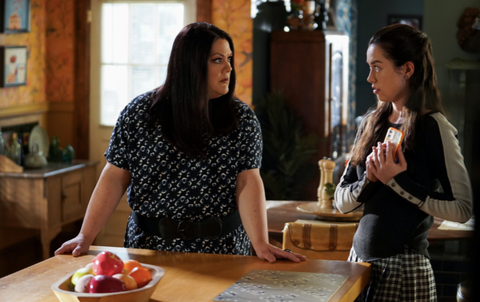 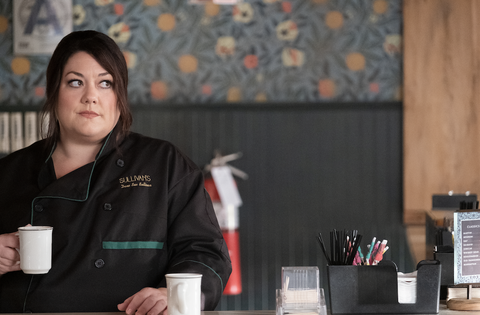 We’ll take a coffee with a side of floral wallpaper, thanks.

“We gave Dana Sue’s turn-of-the-century farmhouse darker, more moody colors, earthy greens and purples with pops of cobalt blue, fuchsia and rich golden yellows. Her house is more cluttered, with art and found objects that express her personality and an open chef’s kitchen packed with the tools for culinary creativity,” says Aimee. (Since Dana Sue’s style is also reflected through her restaurant, we included sources from Sullivans’, too.) 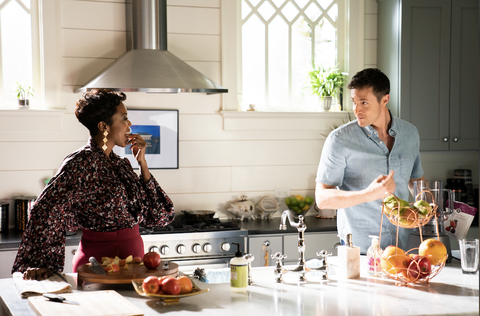 Helen is more about the new and modern—hence, her contemporary renovation on the bones of an older craftsman-style bungalow. “Helen’s world is the most put together of the three, with luxe furnishings on a palette of deep, almost black, blues and grays, and bold patterns,” says Aimee. “Flourishes of pink and yellow, and natural blonde woods and woven textures keep her contemporary look from feeling cold.”

Filled with “silky and soothing” paint colors, Aimee notes The Corner Spa was a complex design challenge, as the team had to recreate the elaborate historical details of a Greek Revival house on a stage. (The Covington, Georgia, property is actually a law office.) “Our construction crew, lead by John Hair, did and incredible job installing the many layers of moldings and replicating the graceful curves chosen for the build. Silky and soothing neutral paint colors were used throughout, with modern wallpaper details to bring in some subtle patterns. Tile played a big part in lending the spa feel, the overall feeling fresh and light. Plants were also an important factor, both large floor plants and hanging planters, to keep what could be a stuffy architectural style feeling alive.”

Get the Spa’s Look

We asked Aimee (over an imaginary round of margaritas, naturally!): Which Sweet Magnolias character is most likely to…
…Brake for Antiques?
“Dana Sue and Maddie would make antiquing a regular weekend outing. Dana Sue could never pass up outsider art, anything with an owl theme, and perfectly smooth vintage cast iron pans. Maddie has a soft spot for vintage bird and botanical lithographs, and vintage furniture in need of being reimagined and refinished”
…Shop at HomeGoods?
“Maddie’s found some steals at HomeGoods, such as the pinstriped linen armchair in her living room. She’s got a sharp eye for design but also for bargains. She has all the dance lessons, drama classes and baseball trips to think of.”
…Decorate with Family Heirlooms?
“Maddie holds on to that strong sense of family, in her children and the family she came from. She has classic pieces throughout the house, including the piano that definitely has a story. She also cherishes her children, with kid-created heirlooms such as the three framed hand print paintings (one from each child) hanging in the kitchen above the living room door.”
…Renovate Every Three Years?
Helen’s sense of fashionable and feminine modern is an important element in expressing her personality. She embraces Serenity’s small town vibe but does not want to be defined by it.
…Plant a Garden?
All three! The southern aesthetic has so much to do with the outdoors. Maddie would favor petunias, begonias and sunflowers for their joyful pops of color, Dana Sue would go for some easy to care for but high-impact in the kitchen (and cocktails) herbs like Genovese basil, marjoram, chervil and unusual mints, and Helen would go for something that is at the same time both exotic and classic, like vibrantly colored dahlias.
…Embrace Chintz?
Dana Sue loves a little sparkle, flash and fun in her eclectic decor.
…Take Up Needlepoint?
Maddie might think about it, with a sense of soothing nostalgia. But we know with her three kids and busy schedule finishing a project would be near impossible.
…Binge-Watch HGTV?
Maddie, she loves the DIY ideas. Though Helen probably takes a sneak peek every now and then to make sure she is solidly on trend.
…Read Country Living
Maddie! Her vibrant and effortless style feels like a perfect match. (Maddie, your subscription’s in the mail.)

Hannah Jones is the Associate Commerce Editor for Country Living, where she covers gift guides and other product recommendations. When she’s not scoping out the latest and greatest items on the market, you can find her hanging with her two rescue dogs.