The Greenbrier always held a special place in Carleton Varney’s heart. The legendary decorator, who passed away this summer at the age of 85, fondly recalled his first trip to “America’s Resort” with his mentor, Dorothy Draper: “Mrs. Draper would always travel by sleeper car to White Sulfur Springs,” he once told me. “I still remember my first train ride with her there in the 1960s—it was all so glamorous.”

Over the ensuing decades, Varney would go on to succeed Draper at the helm of her eponymous firm and serve as the de facto resident designer for The Greenbrier, which Draper first redesigned to much fanfare (it was the most expensive renovation ever completed) in 1948 following its stint as a military rehabilitation facility. It featured on the cover of House Beautiful that summer. 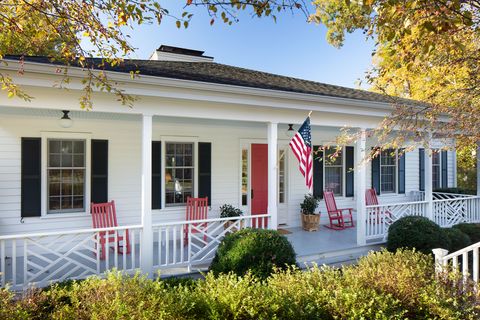 It is fitting, then, that the last complete project Varney would oversee is a residence at the resort, which now bears Varney’s touch across practically every square foot. “For him, it was really a crowning achievement,” says Rudy Saunders, designer at Dorothy Draper and a protégé of Varney’s.

In fact, Saunders says, the hotel’s decor is currently more influenced by Varney than Draper. “For over 60 years he shaped it,” says Saunders. “So many people give Dorothy Draper credit, but it was really his thing. He visited monthly—that was in his contract—so he knew all the staff, he knew every inch of the hotel and everything in it. It was always on his mind.”

Due to its large size and popularity as a resort over so many decades, Saunders says, Varney’s “projects around the world stemmed from guests staying at The Greenbrier or knowing it—it became almost a calling card for him.” Even so, “He was truly such a cheerleader for Mrs. Draper, and keeping her style going,” says Saunders. “He would always push to get her vision through.”

This project is no different. One of several private residences at the Greenbrier Sporting Club, it incorporates the best of Draper—think: oversized chintz, checkered floors—and many of Varney’s go-to elements—assorted antiques, cozy country touches—for a welcoming home that is a stylistic ode to not one, but two design greats.

Though Saunders agrees that this project’s status as Varney’s last makes it special, he is quick to note that Varney himself would probably downplay that fact: “What I’ve always loved about him is, walking through these amazing projects with him, it was never ‘I did that,'” the designer says. “It was always ‘We did this,’ ‘The firm did this.'”

Tour the home below. 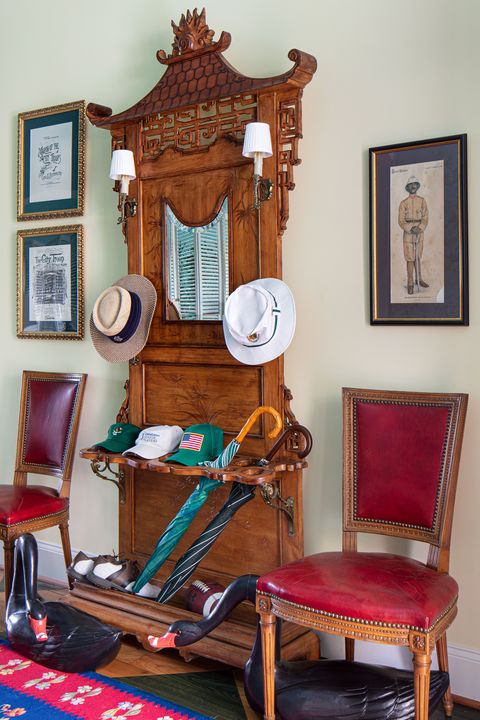 An antique entry tree and low chairs provide a practical place to drop hats and put on shoes.

While Draper loved glossy finishes and glam touches, her successor veered a bit more laid back in his interpretation of her style. “Mr. Varney grew up in New England and always had a practical, country Americana element to his decorating,” says Saunders. “While he certainly loved elegance and sophistication, being able to seamlessly bring in a more pared down look, or a ‘down home’ country style, if you will, was a hallmark of his work.”

“He was such a proponent of the Draper look—now synonymous with The Greenbrier— which he used in combination with his version of Americana, down home decorating, cohesively for the space,” adds Sebastian Varney, Carleton’s son and current President of Dorothy Draper & Co.

That vision coincided with his adoration of antique shopping: Varney frequently made road trips to shop everything from high-end estate sales to hole-in-the-wall junk shops. Many items in this home—like the hall tree, scooped up in Palm Beach, and the red leather chairs that flank it—are the result of his vintage hunts.

“Carleton Varney’s legacy truly lives on in this project because of his innate love for color,” says Sebastian Varney. “Mr. Varney was a strong proponent of color and all of the positive effects it provided to living the best life. The colors in this residence are all bright and happy ones that he loved to use, all pulled together to form a space that celebrates colors.”

That’s plentifully clear as soon as you step inside the home, when you’re greeted with this stairwell opposite the entry tree. “Mr. Varney wanted a statement on the wall as you entered the home,” says Saunders. “The stairs go down instead of up, so we wanted to make sure that it didn’t feel like you were going down to a basement. The hand painted wall mural completely elevated this space so it was on an equal par with everything else in the cottages.”

Unable to find a scenic wallpaper that felt indicative of the local flora and fauna, Varney employed artist Michael Peck to create a custom mural. “He was able to capture the local flora and fauna of West Virginia (including the state flower, the rhododendron). This brings life as you are traveling downstairs to what could have been an overlooked space.”

Varney punctuated the area with a high gloss banister and a Kindel bench upholstered in classic Draper stripe. 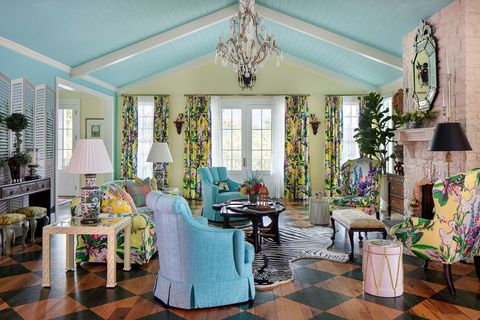 Design devotees will quickly notice the great room’s riff on a Dorothy Draper signature—Varney reinterpreted the marble checkerboard floor for which she was known in a painted wood version, a softer, more mountain home-appropriate application that still pays homage to Draper.

“It’s Draper meets countryside,” says Saunders. “It’s implementing the residential version of the high style Draper look and having it work beautifully in the foothills of West Virginia. The constant dialogue between the glamor and elegance that our firm has brought to The Greenbrier for decades with the unpretentious, countryside vibe of a cottage in the mountains is essential to the success of this home.” 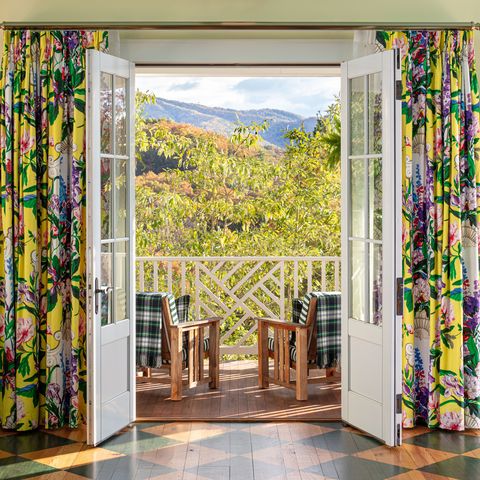 Not only did the Greenbrier’s original design serve as inspiration to Varney, but so too did its location. The great room is optimized to direct attention towards the breathtaking views of the Blue Ridge Mountains seen through the room’s French doors. “Our clients are definitely outdoor people and want to enjoy the lush countryside,” says Saunders. “Sweeping views from porches and through large glass windows captures this. We wanted the porches to have flexibility and allow for indoor and outdoor entertaining.” 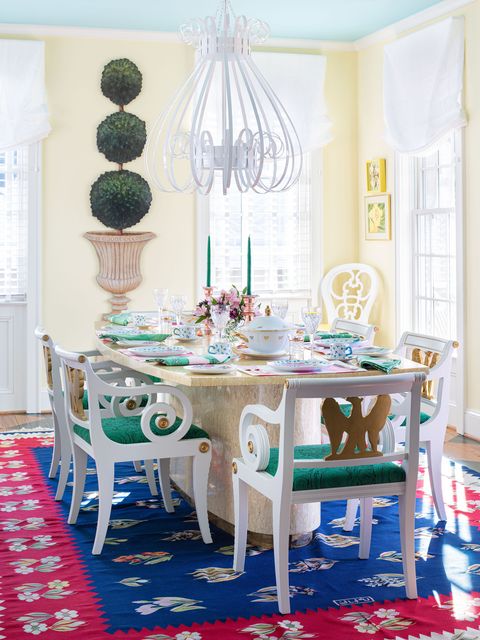 The dining room’s birdcage chandelier is an homage to the design draper created for the met, while the dining chairs are a new introduction by dorothy draper co. for kindel.

The great room’s pineapple walls are repeated in a lighter tone in the dining room, where a trompe l’oeil topiary nods to the exterior, the real focal point of the room. “It was important to celebrate the sweeping views of the Blue Ridge Mountains, so window treatments were restrained throughout the home,” says Saunders. “In the Dining Room we have casual roman shades made of a patterned sheer fabric to soften the hard edges while still allowing maximum views outside.” 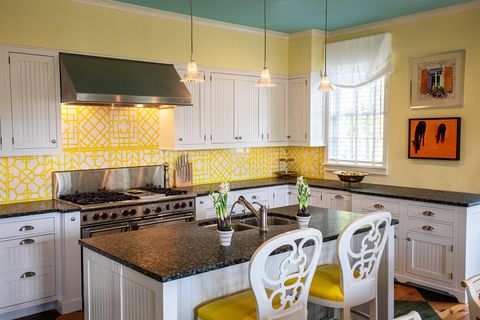 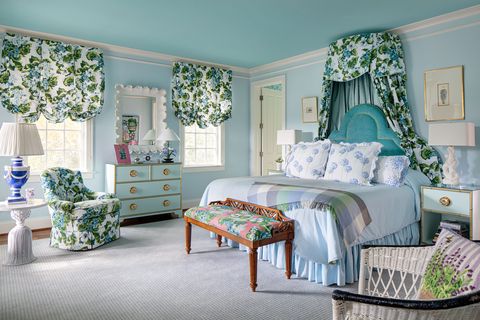 Both the Bermuda Blue on the bedroom walls and the Carleton Blue on the ceiling are from Varney’s collection with fine paints of europe.

“Mr. Varney always believed that a room should look finished with just the backgrounds complete,” says Saunders. “The walls, ceiling, flooring, window treatments—all of these elements comprise the background. Then furniture, accessories, artwork, etc. are added to complete the room.” 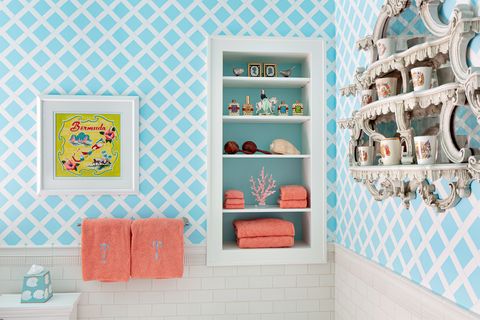 Though the white subway tile is a simple bathroom staple, the Varney touch comes in the form of an aqua trellis on the walls above. The vintage baroque mirror provides storage for bottles. 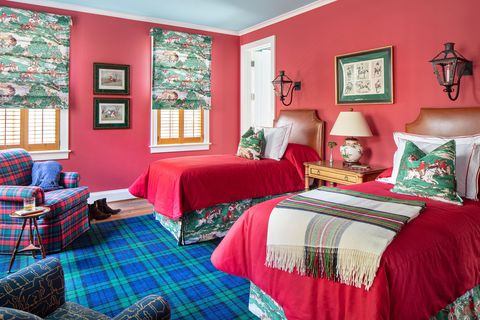 “The fact that all the bedrooms are a distinct theme was something he would always do,” Saunders says of Varney. “He loved a theme! It adds interest for the guests.” Here, the theme is equestrian, with hunt scenes on the curtains and saddle leather on the headboards. Touches of tartan keep the country feel. 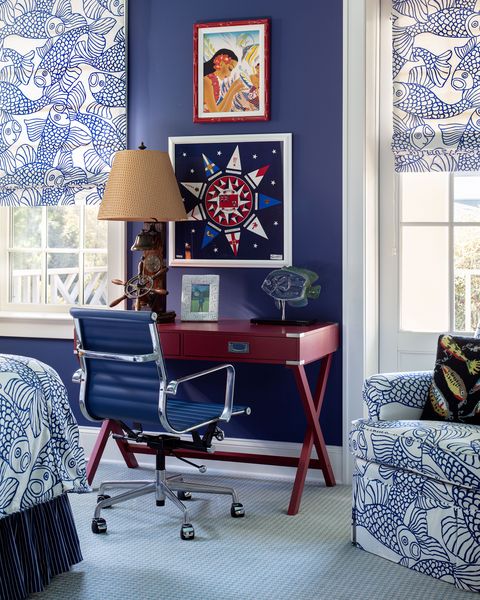 Varney leaned in on customization in this bedroom for the family’s teenage son. “He loves the outdoors, fishing, and golfing so creating a space for him to get away was key,” Saunders says. 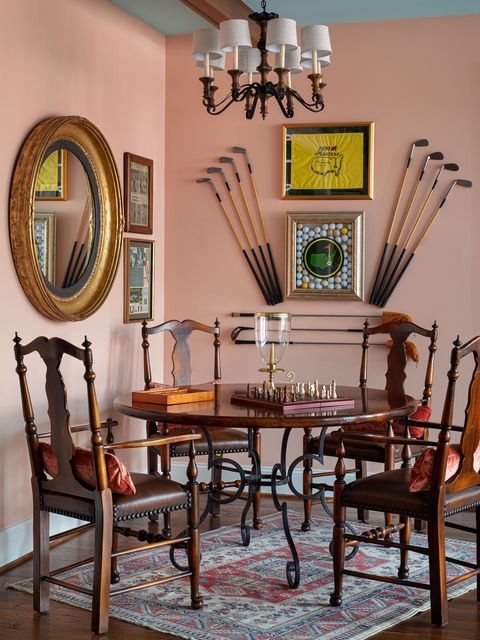 The antique oushak in this lower level hangout (also shown at top) was originally used in The Greenbrier’s North Parlor. Here, it gets a fresh foil in the form of melon-colored walls. “A cozy card table with vintage wood chairs in the corner allows for game nights and adds to the countryside feeling of the space,” Saunders says. 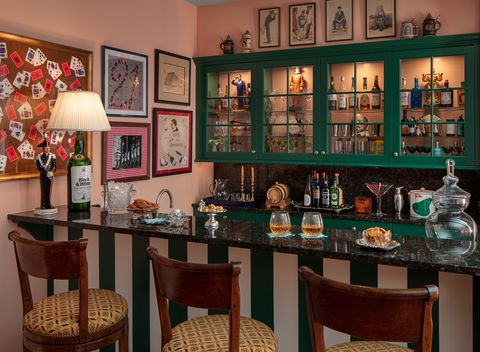 Varney took the bar as an option for displaying the homeowner’s memorabilia, inluding vintage barware, sports souvenirs, and albums. “The family is young and active and we wanted to create a space that completely reflected their personality and tailored it for how they would use this home,” Saunders explains. “For example, they are avid tennis and golf players, so there are nods to these sports throughout.” 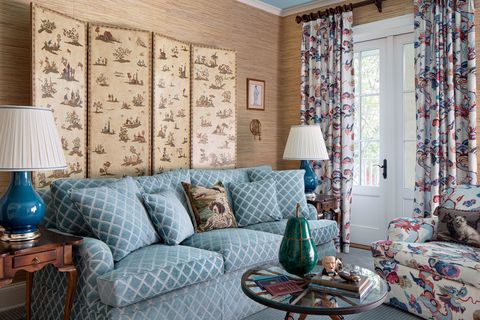 “Working on this project during the pandemic necessitated having an office space,” says Saunders. “This allows the family to spend time here and continue to function when work requires. Turning one of the guest bedrooms into a library office space creates another living space while having a sleeper sofa allows for additional guests.”

Hadley Keller is House Beautiful‘s digital director. She oversees all digital content for the brand as well as working on the print magazine. She has covered covering design, interiors, and culture for 10 years in New York. She served as Associate Market Editor, Design Reporter, and News Editor for Architectural Digest and AD PRO before joining House Beautiful. Hadley is a staunch maximalist and vocal opponent of the Open Floor Plan.