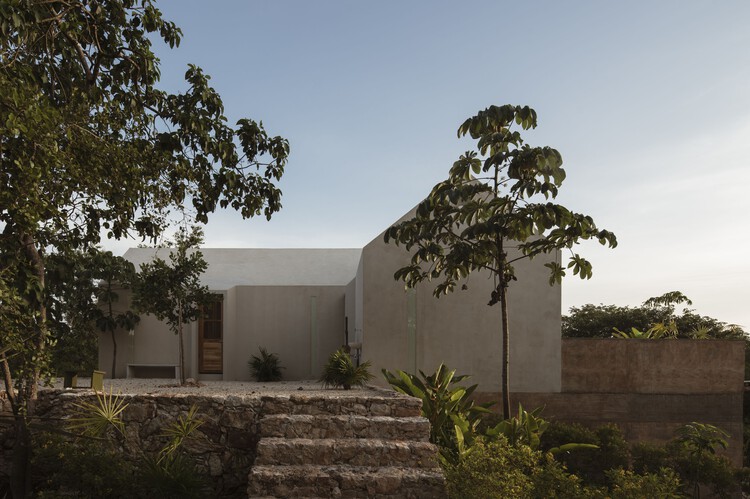 Text description provided by the architects. Galopina is a guest house immersed in wildland that belongs to a Henequen Hacienda within the geo-hydrological Ring of Cenotes State Reserve, in Yucatan. Its objective is to offer a warm, unique and unpretentious accommodation where guests can have an experience of encountering nature and local culture through architecture.

The design process started with the selection of the site. The location was chosen thanks to its accessibility to different consolidated points of interest and its connectivity with Mérida. Having the area defined, we visited some available land and in the end, one of 7 hectares of square proportion was chosen, which we walked in its entirety to discover its particularities. On this tour, we identified that it was an old Henequén crop field, which belongs to Hacienda Yabucú. Despite being a wild lot, we discovered the stone landmarks that formed a 20×20 meter grid, which indicated the areas that corresponded to each worker on the hacienda.

In the same way, the path along which the “truc” circulated, which was in charge of collecting the henequen leaves, was detected. This trail crosses the exact middle of the terrain from east to west, dividing it into a north and a south zone. Exactly in the center of what corresponded to us that path, we found a “sascab” hill, which we decided to use for the location of the project, due to the spatial possibilities that it could offer us and that it represented a distinctive element of what it was offered at other lodgings in the area.

In this land, 32 mecates of the aforementioned grid were chosen, giving a 40×80 meter shape, which was cleared of weeds, leaving only the trees, whose locations were raised to help in the process of defining the location of the buildings that would make up the program. The rest of the land was left in the wild. The main house was located in the southern area, from which access to the property is given. In it, social areas such as the kitchen, dining room, living room, and terrace were considered; The main bedroom and the support and service area.

The pool was embedded in the slopes of the south side of the hill, defined by a retaining wall from which you also climb to cross a bridge that connects to the north side, where the guest rooms were located, two of which were embedded in the slopes of the hill, which have an evident relationship with the earth in the form of caves, and two at the top of the hill, from which there is a panoramic view of the surrounding landscape. All the rooms have the proportion of the Mayan House, but with distributions adapted to the particularity of their orientations.

The volumetry is of strong geometric shapes with the intention of making it clear that it is human intervention, providing a feeling of shelter within the wild landscape. The materials and finishes are rather simple and common sense. They were chosen for their ability to reinforce the sense of belonging to the place and for their capacity of aging with dignity.

All this was landed with local techniques and materials such as concrete floors, lime paint, burnished stucco, and stone masonry, among others. The slabs were left apparent in their entirety, indicating the construction system of the roof of each space, made up of both joists and vaults, as well as reinforced concrete castings. The doors and windows combine steel with rust encapsulator, natural cedar wood, concrete lattices with mosquito netting, and glass (clear and screen-printed).

Galopina is a building that, in addition to being a home, manages to consolidate a philosophy of sustainable living through a concept of domestic hospitality that integrates with its surroundings. This project demonstrates that architecture has the ability to transcend its trade and become a key element in the comprehensive development of a family.