Unless you’ve been living in a world without pop culture for the past five decades, chances are you have seen a Diane Keaton film. We’ve watched her navigate being a mobster’s wife in The Godfather (1972), transition from power broker to stay-at-home mom in Baby boom (1987), seek revenge with her gal pals in The First Wives Club (1996), unexpectedly find love again in Something’s Gotta Give (2003) and, most recently, tap into her inner thirtysomething while trapped in the body of a seventysomething in the 2022 comedy Mack & Rita.

‘Annie Hall’ was a true reflection of me. It changed everything

But it was Keaton’s 1977 portrayal of Annie in Woody Allen’s Annie Hall that ended her to audiences in a way the actor was never anticipated. “I want to tell you something. When I did Annie HallWoody [Allen] would let me figure out what I wanted to wear,” she says of the director’s confidence in her personal style. “That was the beginning of something really great for me, but I didn’t know it would inspire anyone else,” she adds, admitting that she remains shocked by how much the character resonates decades later. The actress remembers: “Woody would say, ‘Wear what you wear’, and it was a bit of a mind shift because [Annie] was a true reflection of me. It changed everything.”

The performance catapulted the then 30-year-old Keaton into stardom. And the residual Annie-effect has since inspired generations of designers who have paid homage to her loose-fitting ties, haphazardly buttoned vests, wide-legged pants and insouciant hat tilts. While Keaton’s style has evolved in the intervening decades, her simple monochromatic silhouettes have stayed the same: most recently she set the internet ablaze as the inspiration behind TikTok’s viral “coastal grandmother”, prompted by Keaton’s turtleneck-wearing, linen-crazed character in Nancy Meyer’s rom-com Something’s Gotta Give.

It’s this fascination with fabric and interiors that now offers Keaton, 76, an alternative career. This October will see her launch a debut fabric collection with the textile house S Harris. It’s not her first foray into interiors: in 2017, she released her first design book, The House That Pinterest Built, highlighting her creative process in a tome that brought her early-1920s Los Angeles home to life. And last spring came Keaton’s second design book, Saved: My Picture Worlda photographic autobiography of graphics and collages she has been collecting over decades and which illustrates very well her singular, less-is-more aesthetic style.

Keaton is a particularly voracious collector of tearsheets and magazine visuals. “Paper is my medium,” she says, laughing. “I’m not kidding when I say that my office is filled to the brim with black binders of graphics I like, all broken up by visuals of house projects and the old Spanish homes I like to look at.” The actress has a weakness for Spanish colonial architecture – she even called one home: a Spanish colonial revival-style villa nestled in Beverly Hills. “Magazines are still my go-to,” she confesses. “I’m addicted, I can’t help it.”

Keaton’s obsession proved to be useful research for the design of her fabric collection, which features strong prints expressed in (what else but) menswear-inspired monochromatics and rich textures. The range, called Elements by Diane Keaton for S Harris, pulls directly from her life – beginning with the actress’s lifelong muse: her mother, Dorothy Hall. “She was a really interesting character – I loved her,” says Keaton of her mother, a photographer, collagist, potter and diarist but also a beauty queen. “She was first Mrs Highland Park – that’s where we grew up – and then she went on to become Mrs Los Angeles,” remembers Keaton, who says that it was watching her mother taking home the title that first sparked the performer bug in her. “I knew I wanted to do thatwhatever that was,” she continues of their shared artistic DNA. “My mother was really creative. She was always doing something with her hands and was never far from her sewing machine.”

It was Hall who introduced Keaton to the joys of making and designing: “We would go to the fabric store and she would encourage me to try different fabrics, take chances and play around with materials. I had all these ideas and she let me run with them,” she says. Keaton took the same approach when creating her textile collection. Working with Keaton was “an incredible experience”, says Jodi Finer, S Harris’s creative director and chief brand officer. “Her approach was intuitive. She never strayed far from her vision but was open to exploration. She came to the table with tons of ideas and inspirations, and together we fashioned a collection that looks and feels like the icon herself.”

At least one fabric in the collection, aptly named Mrs Los Angeles, has been created in her mother’s memory. But there are other name checks too: from the tactile woven Corleone, rendered in hues named after the actor Marlon Brando and author-screenwriter Mario Puzo; to Ghost Herringbone, a nod to Justin Bieber, who asked Keaton to appear in his 2021 music video. Then there’s the Interiors Plaid collection, a nod to Woody Allen’s 1978 film Interiors; and La-Di-Da Sheer, a billowy linen named after her famous line in Annie Hall. “Those early Woody Allen movies really inspired me because I had never been in homes or situations like that before. They introduced me to the possibility of having something to say about fashion and design.” 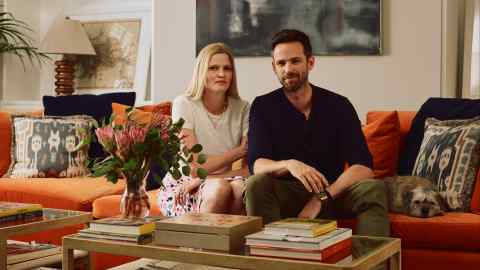 While it may have been Keaton’s quirky demeanour and awkward innocence that first charmed audiences, it’s her deep reverence for authenticity that’s kept her in demand through every creative chapter since. At this point, the Keaton aesthetic has become its own design code: she leaves an indelible imprimatur on every project she undertakes. Just don’t expect Keaton to take her own influence too seriously. “If you need me, I’ll be collaging,” she says.