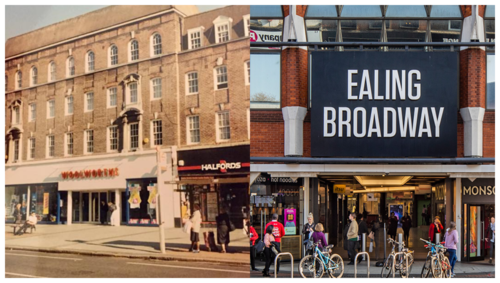 Then vs now: how Ealing’s property market has changed since 1994
A lot has changed in Ealing & Acton – not least the areas property prices. We look at what’s changed in the last 28 years: from the local area to property availability.

It’s July 1994: Tony Blair is PM, four pints of milk cost 84p, Four Weddings and a Funeral is at the top of the box office, Love is All Around will be number one for another eleven weeks – and you can buy your first flat in Ealing for under £76K.

A lot has changed in Ealing & Acton in the last 28 years, not least property prices. Like the rest of the UK, the area’s housing market has transformed since the nineties, with average property prices rising 567%. In the mid-nineties, a semi-detached home in the area would set you back an average £192,834, while a terraced house cost somewhere in the region of £140K. Fast forward to 2022, and the same properties are fetching £2.4 million and £900K respectively, while that £76K flat would now reach over £400K if sold on today’s market.

Step inside those properties back in 1994 and you’ll find more differences than just the price tag. Conservatories were in as a way to add space to your property, while carpets were out, replaced by functional, easy-clean laminate and hardwood. Interior trends were eclectic, including brightly colored accessories, fake plants, stainless steel and the occasional lava lamp. Armchairs were either checked or, bizarrely, inflatable, and terracotta was the most popular paint color for living and dining rooms. The memory foam mattress had only just been introduced, and IKEA was hitting its heyday – you’d be hard pressed to find a home without a Mammut kids chair or Smog table lamp.

There have been plenty of changes to the local area, too. New developments and conversions have increased the number of properties available in this part of London. It’s also more connected than it was 30 years ago, thanks to the completion of the Elizabeth Line earlier this year bringing Crossrail to Ealing Broadway, West Ealing and Acton Main Line stations.

Housing developments and transport links aren’t the only things that have changed the landscape of the area. The high street has seen tumultuous change, with 90s essentials like Woolworths, HMV and BHS disappearing in favorite of the likes of Smiggle, Bubble tea stores and Amazon Fresh (the world’s first ‘Just Walk Out’ grocery store).

Yet there are some things that haven’t changed. Fashion seems to have come full-circle – hello again, bucket hats and dungarees – and you’ll soon be able to catch a film again in the cinema on New Broadway, which closed in 2008 but has been part of a redevelopment that includes 200 homes and a Picturehouse cinema. You can also still find the same Winkworth Ealing & Acton Estate Agents, which has stood at the same spot on Uxbridge Road since it opened in the summer of 1994.

Fiona Lee, the branch’s Lettings Manager, has been part of the Winkworth team since the beginning and has seen the area, and its property market, develop. “Yes, Ealing & Acton has changed, but its community spirit and personality is as strong as ever. It’s made Ealing an in-demand area for a those looking for both a London postcode and a neighborhood with its own identity, and that hasn’t really changed since we opened our branch in 1994. We still see the same diverse mix of people attracted to Ealing & Acton for its character as much as the properties on offer – and although prices have clearly gone up since we started selling here, they are still competitive, especially when compared to other parts of West London.”

Winkworth Ealing & Acton is currently undergoing its own transformation, investing in staff development and qualifications, a full office refurbishment and innovative new ways to reach the local property market, including a new digital marketing initiative, bringing the agency into a new era for Ealing & Acton.