It has been said the castle has a champagne atmosphere – maybe that’s because it was designed by a woman,” says Emma Manners, the Duchess of Rutland, from the splendid neo-gothic castle that casts a sometimes foreboding, sometimes enchanting silhouette over a 16,000 -acre estate in the Vale of Belvoir. That woman was Elizabeth Howard (1780 to 1825), the 5th Duchess of Rutland, who, alongside the architect James Wyatt, envisaged a romantic castle, crossing the counties of Nottinghamshire and Leicestershire, with grounds sketched out by Lancelot “Capability” Brown.

In that spirit, the current Duke and Duchess of Rutland are treating the newly named Howard Bedroom (consisting of a capacious bedroom and ante-chamber) to a grand makeover in collaboration with the handpainted wallpaper house de Gournay. The interior is being transformed by the design company Sibyl Colefax & John Fowler with a scheme referencing the castle’s collection of antique Chinese wallpapers and historical archives. It marks a new chapter in the castle’s almost-1,000-year history – the suite was revitalized with a view that it will be remembered a century from now. Belvoir is one of the few castles in the country that has remained in one dukedom throughout its history and the Manners are keen to ensure this line.

“Elizabeth Howard spent her life working with James Wyatt to create this fairytale castle, which was built on the foundations of a Charles II building. The Duke, who adored hunting and fishing, would leave her in the archives and gave her the power to realize her vision. That was unusual at the time,” says Manners, daughter of a farming family on the Welsh borders who has lived at Belvoir with her husband (now separated) for more than two decades and raised five children there. Being an outsider, she says, gives one “eyes”.

Indeed, Belvoir (pronounced Beaver) Castle, which sits like a crown on the nape of a high hill, has a dramatic past. When Elizabeth Howard (raised in the architecturally magnificent Castle Howard) moved to the existing Charles II manor house on marriage, she was deeply underwhelmed. Demolition was her answer, making way for a castle in the then fashionably romantic gothic revival style. Lady Diana Cooper, daughter of the 8th Duke of Rutland, described it as Elizabeth’s Valhalla: “a neo-Norman, neo-gothic, neo-everything.”

After a blazing fire in 1816, Howard’s new-build castle was destroyed but rebuilt to the same ambitious and costly plans. The surviving Grade I-listed building dates from the early 19th century and has a trompe l’oeil medieval appearance with a central tower. The interior is light-filled and studded with artworks (including works by Nicolas Poussin, Jan Wijnants and Joshua Reynolds) and the open-to-the-public areas segue from the vaulted entrance hall up to opulent staterooms – the most famous being the Elizabeth Saloon, the Regent’s Gallery, and the Roman-inspired State Dining Room – and below them, the dungeons (should you like a visit over Halloween).

The suites offer different styles of decorative glory: three feature chinoiserie papers and silks. These were designed as spaces to host guests – royals, dignitaries and family – just as they do today. The castle’s unique living history proved irresistible to Dominic Evans-Freke, co-director and co-founder of de Gournay, who is an expert in reimagining chinoiserie papers from grand houses, including those of Houghton Hall. “There are many beautiful houses and other amazing chinoiserie examples, such as those at Russell Priory, yet one of the lovely things about Belvoir is its uninterrupted history,” he says. “Many of the great houses have been bought and sold but Belvoir has the power of endurance – you can touch, see and smell the history.”

One of the most exquisite examples of antique Chinese paper is in the castle’s Wellington Room. “The suite and the Chinese bedroom are both decorated in chinoiserie panels that, according to the archives, date from the mid-18th century and were imported from China by the British East India Company,” says Evans-Freke of his odyssey into the archives . “Many of the lengths had yet to be hung and were saved from the fire in 1816.” Receipts amounting to £22 were found for the then very costly wall hangings.

“The Wellington Suite paper is bold and striking and at the time would have offered a powerful statement about the Duke’s worldly interests and breadth of knowledge,” adds Evans-Freke of the visual spectacle. “It is a kaleidoscope of the prettiest flora and fauna native to the southern Chinese mainland – peonies, irises, lily pads and kumquats. These are plants, insects and birds that Europeans would never have dreamed of. In that era, the tendency was to hang tapestries and hangings on walls and even continuous color was rare. To be surrounded by one continuous scene would have been mind-blowing.”

Thus Manners and Evans-Freke set about reimagining the paper in the Wellington Room in opulent new coloursways that would deliver the magnificence of the original. Hours of development were poured into achieving depth of color as well as the illusion of a florid three-dimensional scene. The resulting art paper featuring an apricot background took de Gournay’s specialist painters in China (where it crafts its bespoke papers) 4,500 hours to complete. The paper then became the springboard for an interior realized by Sibyl Colefax & John Fowler’s managing directors Emma Burns and Philip Hooper.

“When you open the door to do something like this, it’s like opening an Aladdin’s cave. Belvoir is private about its history and although it is one of the great ducal homes in the country, it is less developed or known than, say, Chatsworth or Blenheim. That slightly undiscovered heritage has an appeal in its own right,” says Manners, alluding to the fact that the castle is not part of the National Trust but one of the few, including Alnwick and Arundel, that remain in private hands.

Many such houses have to generate an income beyond visitor footfall. Manners has recently published an autobiography of her life at Belvoir and, encouraged by her daughter Violet, is the voice behind the Duchess Podcast, which offers a behind-the-scenes glimpse into historic estates with website links to the castle’s shop and events calendar. The castle is also hired for events, private tours and filming (Belvoir has featured in the Netflix series The Crown) and royalties from licensed products, which include the handpainted de Gournay papers.

The bedroom and anteroom (or dressing room), with its David Hicks-designed 1960s scheme of brown and citrine, appeared tired on the Manners’ arrival at the castle in 2001, but at that time only the curtains and beds were renewed. By comparison, the 2022 reinvention is ambitious, with the de Gournay paper providing the starting point for the design of the room.

“We looked to the spirit of other rooms, which are palatial, but did not want the mood to be so pompous as to become a museum. Mixing humble elegance and grandeur is John Fowler’s mantra,” says Hooper. He has worked on many stately-home projects, creating watercolor sketches to illustrate the nuances of color and texture. The bed offered a focus, with calico toiles being crafted to provide a template for the final hangings made of a rich golden damask and lined in cotton voile. “I began to realize what an art it is to work with decorators at this level – they are artists,” says Manners. “The bed treatment was equivalent to going to a couture dressmaker.”

To balance the jewel tones of the new wallpaper, Hooper introduced a persimmon red “frame” by painting dado rails and skirting throughout the room. The windows were treated with Italian strung curtains. “The tall, narrow windows were a gift from God, so we made the curtains in an unlined stripe fabric with enough body and oomph to swag and drape,” adds Burns. “The rope and tassels amplify the look.” The chaise was upholstered in a diffuse leopard print accented by a subtle velvet stripe. Throughout, opulence is countered by simple, humble elements. The team also had to take into consideration the many paintings, which had to be re-hung in the exact same positions they had been in before.

The antechamber, formerly a dimly lit dressing room, posed another challenge and the decision was made to transform it into a further bedroom installed with the Duke’s father’s bed, newly upholstered in aubergine and ivory stripe ticking. The walls are covered in amethyst velvet and framed by a gold fillet decorative surround, slim up the sensual feel. “There’s a huge skill to hanging fabric and silk velvet but it bounces the light and shade so beautifully and feels amazingly welcome, while balancing the grandeur of the adjoining room,” Burns says.

The works now complete, the de Gournay Belvoir project will go “on tour” by exhibiting at decorating fairs, starting in San Francisco this autumn. Clients will be able to order bespoke Belvoir wallpaper, bringing a slice of design history to their own homes interpreted to their own color choices. The Howard Bedroom has already welcomed its first guest, so mesmerised by the decor, says Manners, they enjoyed a splendid lie-in. 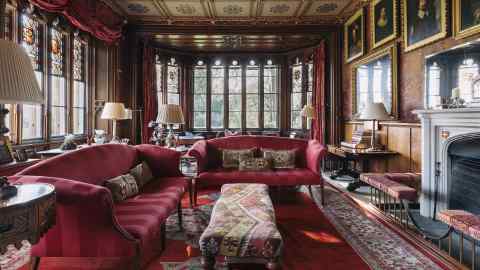