This article originally appeared in the October 2012 issue of ELLE DECOR. For more stories from our archive, subscribe to ELLE DECOR All Access.

Her father is a marquis, her mother is a world-renowned fashion designer, and her husband is a famous bullfighter from Spain. It’s as close to fairy-tale pedigree as one gets in the modern world. And yet Carolina Herrera de Baez is refreshingly down to earth. “Just today I found 14 chairs in the garbage,” she says. “They were perfectly good old metal chairs. I called the super of my building, and he helped me carry them home. It took us two trips.”

While her mother, Carolina Herrera, is elegance personified, Herrera de Baez—who is known as Carolina Jr.—is equally stylish but lives on the funkier, high-low side of chic. An interior design fanatic, she does all her own decorating, mixing colors and patterns with panache without ever spending a fortune or sacrificing comfort. 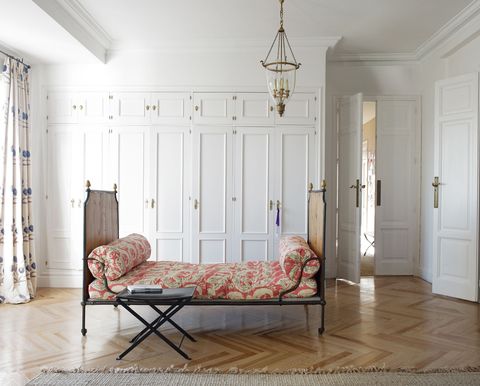 The cabinetry and herringbone floors in the family room are original to the apartment. A light fixture from Herrera de Baez’s first Madrid apartment hangs above an iron-and-wood campaign bed, and the curtain fabric and stools are from Becara.

In Herrera de Baez’s world, antiques and flea-markets find a mix with bargains from shops like Zara Home and Habitat. “Carolina makes everything in our home cozy, happy and unexpected,” says her husband, Miguel Baez.

Seven years ago, the couple jumped at the chance to purchase a historic apartment on the fifth floor of their favorite 19th-century building in the heart of Madrid. Not only was it within driving distance of their country home in Cáceres, Spain, but it had a spacious layout that made it an ideal family-friendly city-residence. The Baezes today have three children: daughters Olimpia, 7, and Atalanta, 4, and son Miguel, 6.

The layout was ample, but the main attraction was the postcard view. “From my window I can see the botanical gardens across the street, and there’s nearby Retiro Park, which is like the Central Park of Madrid,” says Herrera de Baez, who serves as creative director of her mother’s fragrance division and global ambassador for the brands. “The Prado museum is nearby. It’s a great little corner of the city.”

“Carolina makes everything in our home cozy, happy and unexpected.”

When she began to redecorate, she noticed that one of the rooms—a study located between the dining and living rooms—was lined in woven jute (“It looked like potato sacks,” Herrera de Baez recalls). Underneath the drab wall covering was gotele, a stripped stucco that was popular in Spain in the 1970s but that now looks dated and is laborious to remove. “Instead of doing triple the work, I just covered it all up in pink fabric,” she says. “And it gives a cozier look because it makes the wall appear padded.” 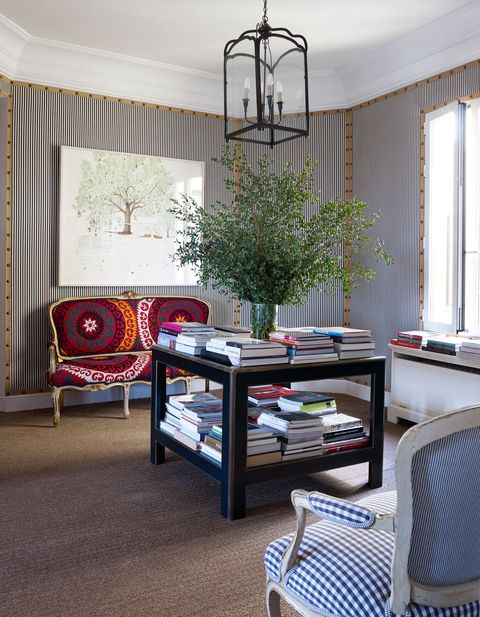 She also adapted the apartment’s formal layout to better suit the needs of a young family. The dining room, with its soaring ceiling and French doors, does double duty as a library and home office. A dressing room contains an antique iron bed that allows it to function as a guest room when Herrera de Baez’s sister, Patricia Lansing, comes to visit. Meanwhile, the kitchen was enlarged and transformed into a spacious family room that became the central hub of the house. “This building has 14 apartments, two to a floor, and more than half of us are friends,” Herrera de Baez says. “It’s open house in my home all the time. At any moment, there might be 10 kids eating in our kitchen.”

“I don’t buy things because they’re fashionable. I buy only what I love.”

Many of the furnishings and artworks in the apartment are pieces that she has owned for years, accumulating them as she moved from her single days in New York and Los Angeles to her married life in Seville, Spain, and now Madrid. She prefers to repaint or reupholster an old favorite than to start anew. “I don’t buy things because they’re fashionable,” she says. “I buy only what I love. And I don’t get tired of the things I have, because they’re not gimmicky.”

For Herrera de Baez, decorating is an organic process that takes time and sometimes evolves through trial and error. The living room’s odd shape (it has five walls), for example, proves especially challenging. “That room has changed nine thousand times,” she says. “At first, I had decorated the space with one huge sofa, but no matter where I placed it, the room just wasn’t coming together. So I had the sofa cut in two. Thank God Bennison still had the fabric. My friends are always saying, ‘What? Are you changing the room again?’” 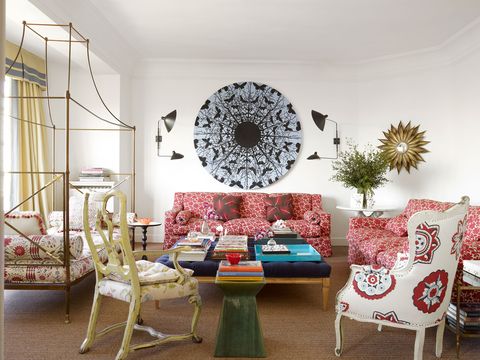 In the living room of Carolina Herrera de Baez’s Madrid apartment, the sofas and the ottoman are custom, the 19th-century bergère is covered in a fabric from Gastón y Daniela, and the 18th-century Venetian chair was a gift from her father. Herrera de Baez and decorator Isabel López-Quesada designed the campaign bed, which has a mattress and bolsters of a fabric from Pierre Frey; Serge Mouille sconces illuminate Xavi Muñoz’s DreamingEye.

From her mother, Herrera de Baez inherited a passion for textiles. She favors comfortable cottons such as the black-and-white ticking of the canopy in the master bedroom. For her children’s rooms, she discovered fanciful fabrics (cowboys for Miguel, and lions and leopards for the girls) at around $15 a yard from Warm Biscuit Bedding Co., an internet site. Meanwhile, there are touches of passementerie—a double row of blue trim on cream curtains, a navy bullion skirt on a round, tufted ottoman—that finishes each space like the perfect buttons or embroidery on a blouse.

In this lively household, no room is off limits to the children, even though there are rules about putting toys in their place at the end of the day. Little Atalanta, for example, can often be seen riding her scooter even in the apartment (with her parents’ consent). “I love a house that feels lived in,” Herrera de Baez says. “This one has a good vibe, with children always playing, eating and hanging out. it feels happy. Best of all, it feels mine.”

Ingrid Abramovitch, the Executive Editor at ELLE Decor, writes about design, architecture, renovation, and lifestyle, and is the author of several books on design including Restoring a House in the City.